“Hairspray Live!”- A Show in Review

You can stop the beat. 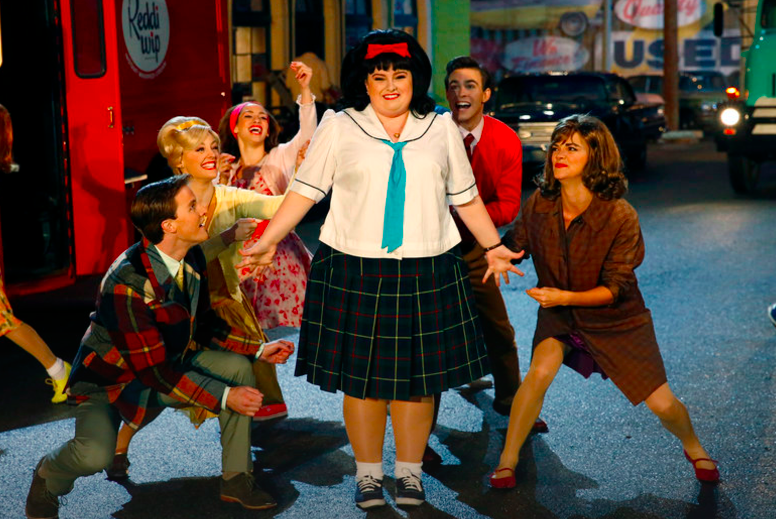 Photo by Justin Lubin of NBC

“Hairspray”, the feet-moving ear-popping musical has spread through the generations. The musical first made it’s appearance in the 1988 John Waters film. It starred Tracy Turnblad as the upbeat, overweight teenage girl dancing through the 1960’s and its racial tensions. The songs, the dancing, and lover boy Link were certainly unforgettable for families across the country. In 2002, the musical was introduced to Broadway with its fan base ever growing. However, the most popular version of the show was certainly the 2007 by Adam Shankman. It featured loads of modern stars including the heart throb Zac Efron (Link Larkin), snazzy Queen Latifah (Motormouth Maybelle), and of course hilarious John Travolta (Tracy’s mother, Edna). Then, NBC made the announcement that next in their line of live musicals (following The Wiz, Grease, Peter Pan, and Sound of Music) would be “Hairspray Live!” The program went on air on Wednesday night, yet did it serve the legacy of the musical? Was it really worth ‘running and telling that’? Can you really not stop the beat? The answer is, not really.

The advertisement for the show was very inflated, but the show was deflated. First off, the casting was a small issue. Newcomer Maddie Bailio (Tracy Turnblad) stunned the audience with her impeccable voice, yet she seemed very flustered with the set. Garrett Clayton (Link Larkin) was handsome and smooth, but his image certainly didn’t match up to the Zac Efron’s dreamy impersonation. Harvey Fierstein, the original Edna Turnblad of Broadway, fit the persona of Edna but didn’t have the same Broadway flare after many years. His voice caused many lines to get lost and his actions didn’t offer up the same admirable mother characteristics as before. Dove Cameron’s voice and acting morphed her into snobby Amber with ease. Her character was just not prominent enough to produce a show stopping performance. But the casting department didn’t completely flunk the show. Ariana Grande was the definition of Penny Pingleton, yet she wasn’t used to her full potential. Experienced Kristin Chenoweth was entertaining and certainly gave off the evil vibe needed to play Velma. The real stars were jazzy Ephraim Sykes as Seaweed and stunning Jennifer Hudson as Motormouth Maybelle. Syke’s dancing left us all with a beat beneath our skin while Hudson delivered a passionate “I Know Where I’ve Been” that left us all wondering where her name’s been on the Broadway playbills.

While the casting was pretty iffy, the camera movements were choppy and difficult to follow. Every song was punctured by intense dance scenes. “I Can Hear the Bells” was flashy and left most of the set in what felt like a high school mannequin challenge. Cue the Black Beatles song. “Good Morning Baltimore” lacked merely logic, since it occurred at night! There were lighting faults and the sound flickered in and out and lines were rushed. Overall, everything felt unsettled, uneven, and reminded many watchers of countless middle/high school productions. It was just, eh.

Another major issue was the plot (or the changes to it). “Hairspray Live” constantly modified the original musical plot by most prominently, altering the ending! Originally, the adorable, quick-moving Little Inez is crowned Miss Teenage Hairspray. In Hairspray Live, Tracy Turnblad wins the competition. Hairspray and theatre fans a like wondered if the adaptation was even legal.

However, a few things did go well for the production. Advertising was well planned and creative, especially with Derek Hough’s, portraying Corny Collins, personal endorsement of Oreo. It sported a retro Oreo logo and gave everyone 60’s deja vu. Not to mention, Ariana Grande and Jennifer Hudson’s final performance gave everyone chills.

So in the end, where did “Hairspray Live” stack up to its potential glory? Compared to the other NBC Live musicals, it was still eh. “Grease Live” blew it out of the water. “Hairspray Live” could’ve been better, it had the opportunity. But due to it’s lack of flow, poor casting, and awkward dance scenes it really fell short.