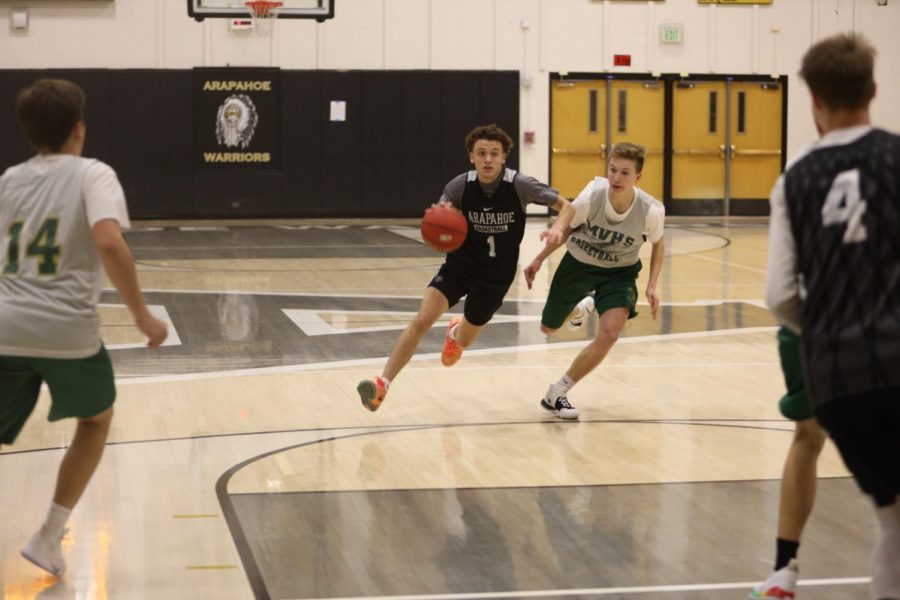 On Saturday November 23rd, the boys basketball team held their first ever foundation game. They beat Regis, 64-49, in an impressive performance. Although this game doesn’t count towards their record, it is a promising start to their season. Led by their new coach, Troy Pachner, the Warriors are looking to step up their game after missing the playoffs last year. Pachner used to coach at Valor High School, which was a powerhouse in 4A.

Led by seniors Bryson Stephens and Korey Hess, the team is optimistic on improving in a few areas this year. The captains have hopes of bettering the team chemistry, which translates to their teamwork on the court. So far they’ve been able to implement this improvement through team bonding activities and taking time to work on the team off the court. A tournament the Warriors attended over the summer in San Diego and frequent team dinners the players participate in have proven to be large contributors in strengthening the bonds amongst them. Hopefully, this rebuilt court chemistry will help the Warriors climb the rankings in the Centennial league, which is considered the most elite basketball league in the state.

Many assets are on Arapahoe’s side this season; the Warrior’s competitors this year appear to be weaker than in past years, potentially boosting the team’s record this year and helping them place higher in the league rankings. Another asset proving to be on Arapahoe’s side is their abundance of young and old talent on the team. With skilled upperclassmen like Ben Yagey and talented underclassmen like Chase D’Agostino, the Warriors are a force to be reckoned with. When asked to comment on the team’s newfound talent this year, senior, Joe Liberty, didn’t hesitate in saying that, “A lot of people are sleeping on us this year, but we are coming back stronger and are determined to make some noise in the playoffs.”

But with the advantages, come the disadvantages. One of those disadvantages being that the players themselves are mostly not super tall. With a large portion of the team being made up of underclassmen, there are only two players on the roster listed at 6’5  or above. They hope to compromise for this downfall with their exceptional speed, shooting, and outsmarting other teams with their new game plans. In past years, teams with taller players have had the upper hand on the Warriors, but this team is very aggressive this year. They are ready to fight for rebounds, just like they are going to fight their way up the standings this year.

On Thursday December 5th, the Warriors defeated Arvada West by a score of 76-58. After losing to the same team last year, this is a good sign of what’s to come for this team in the future. On Friday, they will travel to Chaparral High School to face Legend, another non league opponent. It’s vital that the team gets a head start to the year and carry that momentum into league play. Go support your Warriors this week and prepare for the best season yet!