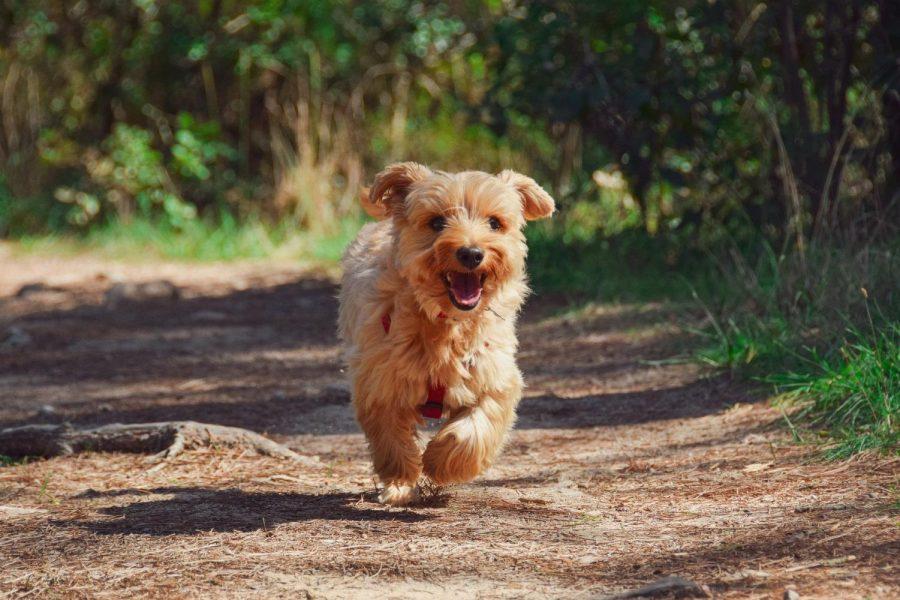 Nicknamed “man’s best friend”, canines appear as significant members of our families and our culture. My mom even has paintings of my two dogs hung up in the hallway, gifted to her by my father. At Arapahoe, the popular companionship of dogs seems no different. Many students are proud to call themselves dog owners. Although all dogs of AHS students are great, we decided to host a photo contest on our Instagram to find out the top dog. In the past week, submissions of canines of various breeds and sizes have flooded our inbox. So prepare for some pawsitively adorable descriptions that – dog lover or not – will undoubtedly bring a smile to your face.

Photos (all by owners) are located on our Instagram story: @ahswarriormedia.

“Kingston is very outgoing and friendly and loves catching rabbits and squirrels when he’s not napping” says owner Ellie Franklin.

“Buddy Miserlian turned 11 on November 7th this year (he’s a Scorpio). In his free time, he likes to play, eat, steal socks, and sleep. He is also an Instagram influencer @buddy_the_hot_blonde!” exclaims owner Maya Miserlian.

“This is Sam, she had a tiny bit of her ear bitten off as a puppy and now she does the same with her stuffed animals” says owner Athena Wright.

“This is my dog Harley in the TJ Maxx sweater my mom bought him cuz he’s always cold. We fostered him before adopting. He has no teeth (so his tongue hangs out all the time) and loves walks. Also, he’s kind of sort of TikTok famous so that’s always a fun fact” exclaims owner Olivia Janicek.

“So this is my dog Oreo, he is a year old as of Oct 20th. He is a Border Collie, Australian Shepherd mix. He’s obviously very active and has many favorite activities. He likes to give hugs… and is a very cuddly boy. Some of his other activities are just laying down with his rope and letting you drag him around, as well as being very adamant about being chased around the yard” says owner Matthieu Helaine.

“This is Jake. He is 7 years old and loves to nap… He’s a big boy, loves to cuddle, and loves to hike. If he could talk, he would sound like Ryan Reynolds… He’s also named after Jake from Cartoon Network’s Adventure Time” describes owner Emme Barnes.

“Fynn is a border terrier from Arizona. He loves napping and loves to cuddle but he is also really playful! He has asthma but that hasn’t got him down from being an active puppy!! He also loves La Croix!” exclaims owner Abbie Gage.

“This is Lady… Dog like.” says owner Michael Wilson.

“This is my dog Napoleon… We found him in the streets and tried to find his owner but couldn’t so we kept him. We loved him so much we adopted another Chihuahua (named) Jack” describes owner Joseph Fitzgerald.

“Her name is Belle. She is a mutt that loves to be outdoors and tennis balls! Her favorite food is eggs” exclaims owner Allie Zier.

“Coco is a Woodle and she is 7 years old. Sometimes she pees when she gets excited to meet new friends. Her talents include; playing dead, dancing, and epic snuggling. She currently holds down a full time job as a squirrel hunter” says owner Sam MacKendrick.

“His name is Walker and is almost 5 years old. He is a Wired Haired Pointing Griffon. He is a French hunting dog. He loves to chase squirrels, bunnies, and birds. He is a sweet dog and can smell anything. One fact is that he is hyper allergenic and doesn’t shed” describes owner Mason Oliva.

“I’m Sugar. I’m an older spunky doggo. I love walks and my favorite treat is bacon. If the door is open, I’m bolting (because) I love going exploring” describes owner Sam Jones.

“This is Beyonce and she’s a good girl previously from Texas. I’ve had her for three weeks” says owner Calen Lawson.

“Lucy is a 7 month old Toy Poodle who is full of sass. She loves her long walks and belly rubs” explains owner Hannah Gienger.

“Stanley. Plays fetch… He’s loving to everyone, he never barks, gets so excited every time he sees you. He will play ball with you no matter what, that’s all he wants. Really smart. And he can jump the fence” describes owner Sean O’Melia.

“(Von Red, Decker Blue) Von acts like a cat and makes you rub his paws every morning and Decker is a big snuggler. Both are brothers and were found in a dumpster in New Mexico” says owner Mitchell Borcic.

“His name is Barley and he is a 4 year old Bernese Mountain Dog! He loves to sleep and eat” exclaims owner Ryleigh Moore.

“This is Rex- short for Tyrannosaurus Rex! He’s 10 months old. He loves sprinting in the snow, playing with his toy dinos, and is mischievous but loves kisses and cuddles” says owner Julia Margason.

“His name is Scout and he is a Shiba Inu… He is around 7 years old, he can’t bark so he makes crazy noises instead” says owner Ava Powell.

“This is Bella… She is purebred Samoyed, smaller than most, and is a very loving and kind dog” describes owner Sean Morita.

“This is Coal, he’s an English Black Lab, he’s 10 years old, he loves hunting all the rabbits and squirrels in our backyard, and his favorite food is cheese… His insta is @coal.the.labrador.retriever” exclaims owner Kristin Avery.

“This is our family dog Snoopy. He is a rescue pup that we got when he was 2 months old. Before he was with us, he was left abandoned with his brothers on the side of the freeway. He turns 4 in January and has been an absolute amazing addition to our family” says owner Grace Arnold.

“Her name is Sorina! She is a 6 year old Golden Retriever who loves anything food-related, the snow, and watching the Hallmark Channel” says owner Bridget Gorder.

“This is our puppy Callie! She is cava poo which is Cavalier Cocker Spaniel! She is still just a puppy! Only 4 months old! She loved to chew on bones! And loved to play fetch… This is Teddy! He is a Pomeranian, Pekingese, Multese, Poodle! So a mutt! We got him from a breeder! He is a little on the fat side. He loves fetch and snuggling. He is also super smart! He lays on his back like a person when he sleeps too” says owner Hannah Resley.

“His name is Tommy and he is a 13 year old Vizsla. When we were first looking for a dog, we got in contact with a rescue and they told us about him. His previous owner showed dogs professionally and gave him up because she thought he would not show well. We finally adopted him under the agreement that we would show him. Agreeing we hired a handler and everything, took him to shows across Colorado, (and) one day that same lady who wanted to give him up was at the same show as him. Tommy wiped the floor with her… Tommy later went on to win best in show at several different dog shows” exclaims owner Constance Rathsack.

“This is Tolli, he is an Anatolian Shepherd and about 140 pounds. He likes to jump up and hug you when you get home, lives on a ranch and has chased down a full grown deer. He also can jump over a 6 foot fence” describes owner Spye Turnbeaugh.

“This is Remington, Remi for short. He is a 10 month old Golden Retriever and his favorite thing to do is watch dog videos, chase his tail, and destroy every single toy he owns… I’ve never seen him tired” says owner Kayleigh Krueger.

“This is my pug Lola. My mom rescued her off of I-25 a few years ago. We ended up having to take her to the pound so that her owners had a chance to find her, but they never came for her. We officially adopted her on Thanksgiving a few years ago, and can’t image what life would be like without her. Almost immediately she fit right into our family and got along with our other dogs. She is small but feisty and runs the house. She acts a lot more like a cat than a dog at times. We are very grateful for her!” exclaims owner Kenzie Tenney.

“My dog’s name is Loui… He is cool” says owner Chase Lee.

“Jack was adopted because we fell in love with his brother so we got another pup. He loves to squeak his toy duck” exclaims owner Joseph Fitzgerald.