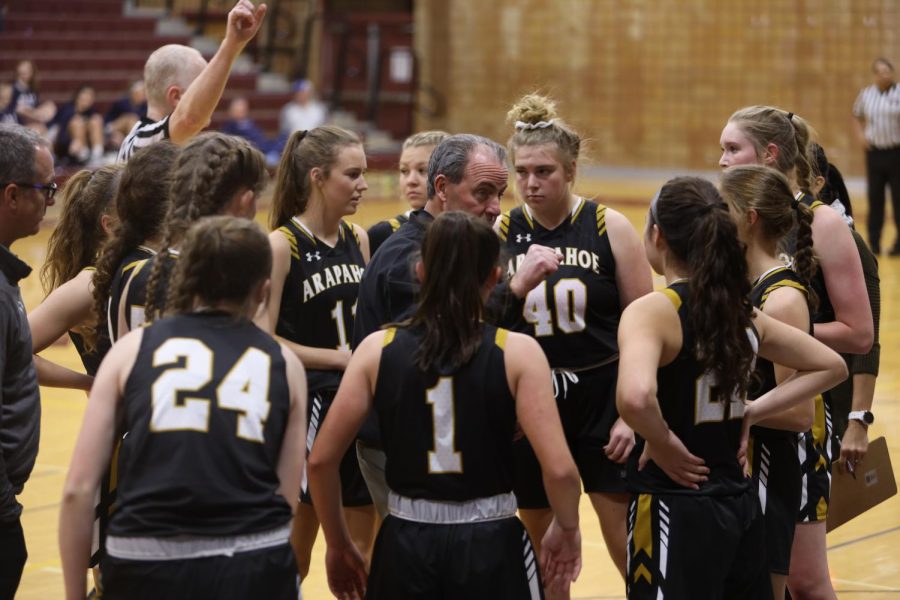 On November 23, swells of fans piled into Sitting Eagle Gymnasium to watch the highly anticipated 2019-20 girls basketball team hit the floor in their second annual foundation game for mental health awareness against number five ranked Regis Jesuit. From the tip-off, the girls played strong, took a commanding lead which they held for the majority of the game in the highly anticipated exhibition matchup. Although the final score didn’t result in a win, head coach Jerry Knaflec and the lady warriors proved to everyone in the audience they have what it takes to be a top team in the state and build on its playoff runs from the previous years in hopes of making it to the Denver Coliseum.

Just this previous winter on February 22, the team lost a tough battle to league opponent and eventual 5A state champion Cherry Creek in the second round of the playoffs 57-26. They finished the year with an overall record of 13-12 (.520) and a league record of 8-6. All losses within the league were to 4A State Champion Mullen, 5A State Champion Cherry Creek, and 5A State Runner-Up Grandview. As hard as these losses were, they were an intricate part of the blueprint for the future. They showed the younger players what it was going to take to compete with the state’s top teams and where their hard work could lead them.

This season, the lady warriors will retain all five starters from last year’s playoff run as well as two bench players, ready to put their rebuilding year in the past and take the next step to compete for a championship.

The backcourt, made up of Senior Captains Kali March and Kathleen Wortman, will be essential to the team’s success on both sides of the ball. The dynamic duo started every game last season and lead the team in minutes, points and steals per game. On offense, both guards are always making everyone around them better. They are great at finishing around the rim and have a high-level three-point stroke. They will be tasked night and night out by Cherry Creek and Grandview who both boast division one commits in Jana Van Gytenbeck (Stanford) and Tomia Johnson (Florida Gulf Coast). As great as those players are, if March and Wortman commit to tenacious defense and push themselves, I know they are capable of limiting the high powered guards of the Centennial League that picked them apart a year ago.

In addition to these standout captains, Sam Crispe, leader of the frontcourt will continue to build on her impressive freshman year. The 6’2” sophomore center is ready to prove she has what it takes to effectively rebound, produce on both ends of the ball consistently and compete with the best centers in the state. After a year of playing against Lauren Betts (USA U16 National Team Player) and Cali Clark (Colorado State Commit), Crispe knows the strength she needs to carry the lady Warriors through league play. I know she is fully capable of playing to her competitions high level and will improve substantially at rebounding and finishing in the paint against her matchups as the year progresses. Last year, as a freshman she led the team in both offensive and defensive rebounds. Offensively her post moves are very strong, and her finishing is improving by the day especially through contact. As long as Crispe is confident in her ability to defend the leagues’ star bigs, games against top opponents will go down to the final possession.

Other starters and players to watch out for include Jayden Staab and Marley Delaney. This is both their third year on the varsity team and they continue to establish themselves as key role players.  Staab, a pass-first senior guard, is a great ball-handler and one of the lady Warriors’ top three-point shooting threat. Delaney, a senior post, is the team’s main energy source and hype man. She is the definition of a team player, constantly laying her body out on the line taking charges for the benefit of her team.

Personally, I think this is going to be the best year head coach Jerry Knaflec has ever had in his 10 year tenure. He has an experienced roster full of all-league players, one of the most experienced backcourts in the state, one of the most skilled centers, and a deep bench that plays tough on both ends of the floor. Come February, this lady Warriors team has the potential to shock many critics in the state return to the final four for the first time since the 2012-2013 season.