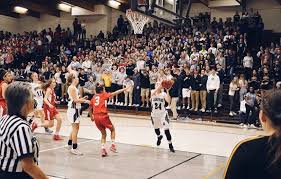 Last night the girls basketball C-Team battled the Cherokee Trail Cougars in an exciting competition that ended in a nail-biter finish.

Early on the Warriors struggled to get much going and that carried on throughout the first half. The Warriors put up a sad 7 points in the first half. #14 Addie Dollaghan (10) scored 2 points for the Warriors while also dominating on defense, blocking multiple passes and shots. #4 Aisha Kungial (10) snagged a rebound and put it back up for an easy 2 points,#11 Sydney Loos (9) intercepted a CT pass and returned it for an easy layup, and to finish out the half #32 Morgan Gilchrist (9) hit a free-throw to bring the Warriors’ score to seven by the end of the first half while CT put up 18 points.

After halftime, the Warriors got their offense up and running by putting up 10 points in the third quarter alone, and scoring an additional 9 points in the 4th quarter. Sophie Pallman (9) said, “We showed our strength by coming back in the second half .”

However, there were many Warriors who had great games. For example, #40 Gabby Roose (10) lead the team in rebounds and assists. The best score for the Warriors was when Aisha Kungial (10) hit a deep 3 that was wetter than the Atlantic Ocean.#23 Ava Sevier (9) was all across the court and showed up to play last night, she went on lockdown on defense and she scored multiple times.

The final score was 26-32 in favor of CT. After the game Gabby Roose (10) said that when the Warriors play the Cougars next it won’t be another close game. The Warriors play at home next on January 4th at 10:30 am.