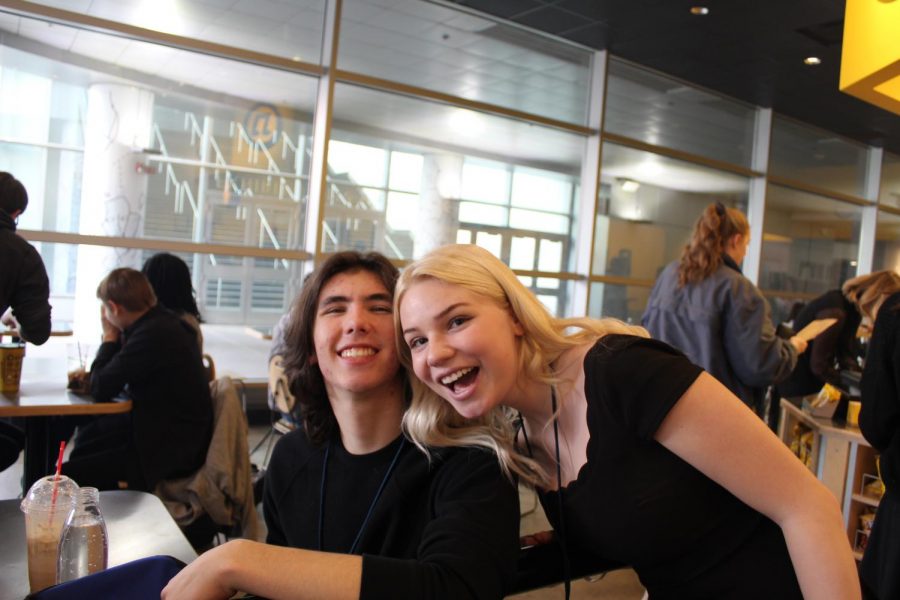 Kai Oklesson and Briana Beebe on the first day of the International Thespian Conference.

From December 12 until the 14th, the Arapahoe High School Thespian Society attended the Regional Thespian Conference at the Colorado Convention Center. At the conference, 16 of the 27 individual events that were brought from AHS were ranked as superior, qualifying these events for the International Thespian Festival in June in Bloomington, Indiana. Along with that, five seniors, Matthew Carey, Cambria Bartlett, Ellie Olsen, Shellee Schwartz, and Colby Kenney, pursued an opportunity to audition for universities in the region, which resulted in a total of 90 college callbacks. Maya Kwiatkowski (11), also qualified for a mainstage callback, an opportunity that was only available to 23 of 5,000 students that attended the conference.

Kai Oklesson and Briana Beebe (see photo above)  are both active theatre students at Arapahoe. Oklesson played the role of Danny Zuko in Arapahoe’s winter musical, Grease, and Beebe assistant directed the most recent fall play, Peter and the Starcatcher. Both are students in the advanced theatre class, Company, and have featured roles in Arapahoe’s upcoming production of Seussical.

Maya Kwiatkowski qualified for a Mainstage showcase callback with an IE Musical Theatre solo called from the Jason Robert Brown show, Songs for a New World, which she qualified for the Festival. “The process was very similar to an open audition. I arrived at the room and they checked me in and made sure my song was up and working. They invited us all in and we got to sit and watch each other perform. They would call us up one by one and have us do 2 minutes of our piece, and then from what they heard at the callbacks, they said they’d make cuts and let us know the next morning. It was incredibly nerve-racking. It was like being in a room full of the most talented teenagers you’ll ever meet. But it was also incredibly supportive, and you could feel that the judges wanted you to succeed,” said Kwiatkowski.

Kwiatkowski is also a very active theatre student in Arapahoe. Coming up, she’ll play the Sour Kangaroo in Seussical, hence her consideration for going into it as a career. “It’s hard to tell what I want to do in the future, but I also cannot imagine not doing musical theatre. I’ve been doing it for so long, and I feel like it has become such a part of me. So, if I’m lucky enough, I’d love to pursue my love for musical theatre in college and on!” claims Kwiatkowski. She definitely enjoyed her experience and made a lot of great memories. “My favorite memory from Thescon was simply sitting in rooms and watching the incredible talent there. You will never step into another space that has so much pure talent as Thescon does.”

Thescon: The Technical Side of Things

Kate Scadden generally does a lot of tech for the Arapahoe productions; however, she decided to present a scene from A Streetcar named Desire for her individual event. “I decided to try acting for the first time. It was something different for me than a tech presentation and gave me an opportunity that I hadn’t had before,” said Scadden.

Thescon: An Actor’s Point of View

Austin Sellars’ reaction when she opened her score report from Thescon, which qualified her for the International Thespian Festival. Sellars performed a IE Solo Musical Theatre piece as well.  “I did a solo performance of “I’m Breaking Down” from the musical Falsettos! Falsettos is easily my favorite musical of all time and i have always wanted to perform this solo, so Thescon was the perfect place to do that,” said Sellars.

What was your favorite workshop?

“I really liked going to the makeup circus workshop. I don’t usually go into costuming in theatre so it was interesting to learn about. I went because of friends that are in costuming and I’m really happy that I decided to go.” -Scadden

“The very last workshop of thescon, myself and a few friends went to a strutting class taught by a Broadway dancer. It was a super fun class with awesome music where he taught everyone to strut with confidence and embody different types of characters through a walk. Overall it was super educational on building character and also really fun!” -Sellars

What was your favorite individual event to watch?

“My favorite was watching the tech challenge. It was something I wanted to do but wasn’t able to this year. I’m really excited to try it next year though!” -Scadden

“I enjoyed watching Kid Simple, because even though Ihad no idea what was going on half the time it was really cool.” -Sellars

Between the two mainstage shows, Matilda: The Musical or Kid Simple: A Radio Play in the Flesh, which show did you like most?

“I preferred Matilda over Kid Simple. Matilda had some interesting tech aspects in the set and I loved watching that part of it. The songs were really well done and it was a fun show to watch.” -Scadden

“Kid Simple was just more fun to watch, though both shows were done incredibly well. Kid Simple was wildly out of pocket and just odd, which kept me engaged the entire time. The overall technical work and acting was also just really impressive.” -Sellars