The Return to the Big Screen

Visiting the movies for the first time since the start of the pandemic brings back familiar thrills. 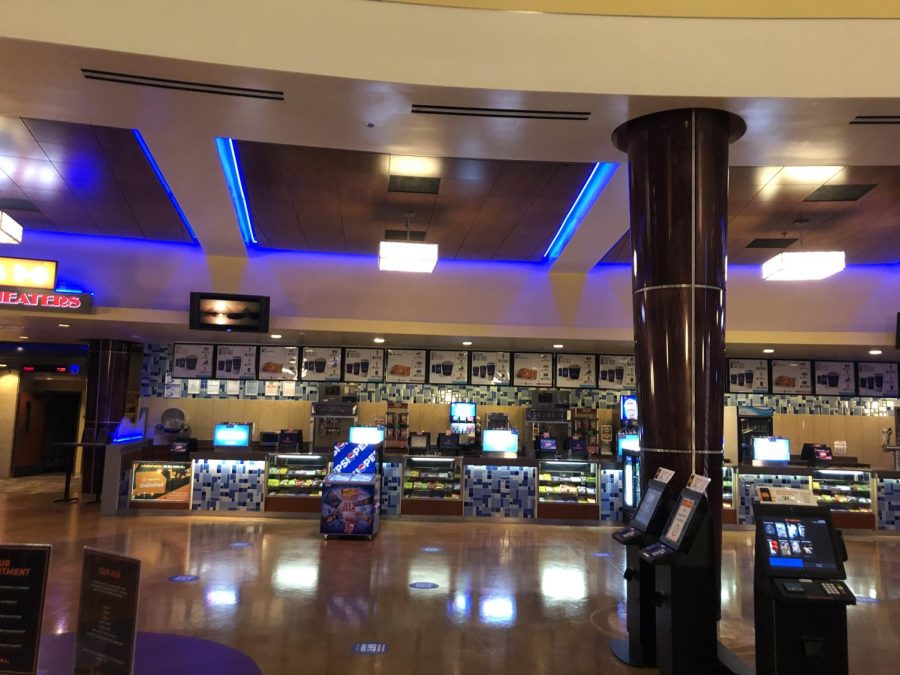 The lobby at Regal Southglenn

The few weeks following March 13 live in infamy. The school’s doors were locked. The restaurant tables, filled with dust. The curtain at the Buell Theatre, drawn. We all settled into a post-apocalyptic world, one in which we barely left our homes, because there was nowhere to go. Never did we think we would take for granted a seat at a bar, or a desk in a class, but there we were. After a while it began to feel as though things would not ever return to the way they were, at least not completely. But tentatively over these past couple months, life has begun to do what it has always done. It has grown to survive and adapt. Small moments of normalcy have returned to our possession. Even the most mundane things bring joy and a newfound sense of wonder and appreciation. This is precisely how I felt when on a normal thursday night of last week, I found myself sitting in a reclined movie theater seat, with butterless popcorn, watching the animated Regal roller coaster take me through a familiar land of color and floating candy. It was nothing short of magical.

When I walked into the Regal Southglenn theater with my dad on Thursday, September 10, it felt strange and warped. The lights were on, the machines were whirring, and the bulging advertisements were plastered everywhere. But it was an empty room, except for us and a Regal worker decked in blue and black, waiting by the counter. So we gave them our tickets, paid for some snacks, and walked the dark hallways to the screening.

There’s always a certain thrill that comes with being the only one in a movie theater. You can put your feet up on the seats in front of you, talk amongst yourselves, and sprawl out however you want. This time however, it felt different. My dad and I took our seats, and it felt very appropriate to be alone, nobody else near us. And eventually when a couple people filtered in, they didn’t sit anywhere within our vicinity. We were all spread out across the black identical seats, far away. That felt appropriate, too.

We were there to see Christopher Nolan’s Tenet. The trailer, for those interested, is linked below. Led by John David Washington and Robert Pattinson, the film was an Inception-esque time warp thriller. The cinematography was incredible and the acting equally great. It was a truly well done and enjoyable film, albeit extremely mind bending. Although, while it was playing, I often found myself watching the theater itself, rather than the screen. I looked at the people, well, the backs of their heads. I gazed at the lights. The projector. It felt almost euphoric to be back in those seats. It felt so natural, like I’d never left. It was then I realized how dearly I missed it. So when I walked out of the screening room after the movie was over, I found joy in stretching out my cramped legs. I looked at all the posters hung on the wall. I relished in the bright lights. It was strange, I don’t think I’ve ever come out of a movie thinking more about the experience than the actual film, but it happened that Thursday night.

Perhaps the most remarkable thing about the whole experience is that I was so caught up in how absolutely, incredibly, normal I felt. It was strangely welcoming. When all the lights go down, and the trailers start to roll, you’re allowed to forget about what’s going on outside. You aren’t thinking about how when it’s over, you’ll put your mask back on, and stay six feet away from all the other theater-goers. It’s a common thread to be sitting in that familiar dark room, a different type of connection I hadn’t had for so long. When my dad held out his camera to take a grainy, low quality selfie for my mom, I realized the whole point of how I felt walking in the theater that afternoon; the value of any experience is hard to measure until you come to realize what it’s like to live without it. It’s not a constant, and neither is the connection that comes with it. I didn’t realize how much going to the movies meant to me until I walked in. There’s a lot of scary things going on outside, but reclined in the chair, I felt safe – and that feeling is hard to come by recently. My review of the experience is multiple gold stars, a 10/10, or maybe a stamp that says “wow!” I just might have to go see the movie again just to sit in those isles, because I already miss it.

This is just one of many examples as to how “regular life” is returning to us slowly. More cautious than before, of course, but we’re beginning to again find small things that tether us to the ground and remind us what life can be like. These moments are so important, and I’m excited to keep finding them. Although it didn’t have that opening night buzz of people packed shoulder to shoulder, this experience was nothing short of remarkable, and it’ll get even better with time. I’m looking forward to it.