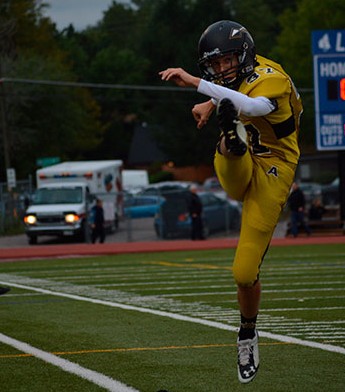 Week four is right around the corner. With the waiver period ending and the bye weeks beginning, it is time for the newest installment of Fantasy Three Up Three Down.

This is more about the Chargers’ RB depth chart dissolving than Brown’s own talent.  After injuries to their top two backs and the Cardinals stealing away #4, San Diego has only 2 RBs on their roster: Brown and undrafted rookie Branden Oliver. Brown stepped up by carrying the rock 31 times last week, and faces the vulnerable Jaguars.  Definitely starter-worthy in a bye-heavy week.

The praise of Wilson by Broncos defensive back Chris Harris is completely warranted given Wilson’s numbers this year. Wilson has been solid through three games averaging around 18 points per game and a startling low amount of turnovers. While he isn’t the caliber of such fantasy megastars as Peyton Manning, Drew Brees, and Aaron Rodgers just yet, he is top 10 fantasy quarterback with more weapons at his disposal than an Expendables movie. If you are searching for a starting option at the quarterback position, Wilson is your guy.

The first question most people ask when looking for a fill-in D/ST is “Who’s playing Jacksonville?”  In week 4, that’s San Diego.  But they have other benefits to them too.  This crew has increased their points scored each week (7 to 9 to 12), and is poised to do it again. Rookie Blake Bortles is making his first career start this week, and there will be a learning curve. Even Peyton Manning threw 3 INTs in his first game back in 1998.

Martin has been an absolute disaster this year. After a breakout rookie campaign, the injuries suffered in his sophomore campaign have clearly carried over to this year. Martin has a grand total of (and this is not a mistype) zero points through three games. With Martin’s quarterback situation in limbo and a bum shoulder Martin’s stock cannot fall any faster. We aren’t saying drop him quite yet, but we are saying that he should be acquainted with your bench very quickly.

Clay was a popular sleeper TE pick going into many drafts, and for good reason.  He notched 6 TDs and averaged almost 50 yards per game last season.  He’s seen consistent targets this season, but hasn’t had more than 31 yards in any one game, and has zero TDs for a grand total of seven points over three games. Ouch.   You could blame it on his lingering knee injury, though; he’s bounced between probable and questionable on the injury report all season.  So while his performance is down, his targets prove he still has potential.  If you’re a gambling man with a need at TE, he’s worth pursuing in a trade.

We’re apprehensive putting Rodgers on this list, because on any given Sunday he could put on a performance demonstrating he’s the best QB in the NFL.  But stats don’t lie; in two of his three games, he failed to top 200 yards passing or earn more than 10 fantasy points.  And the normally potent Packers’ offense only managed one meager TD last week in a loss to the Lions.  Maybe putting Rodgers on this list will reverse-jinx him back to becoming the first-round-pick worthy player we know he is.