The Short Game: NFL Public Relations: A Comedy of Errors 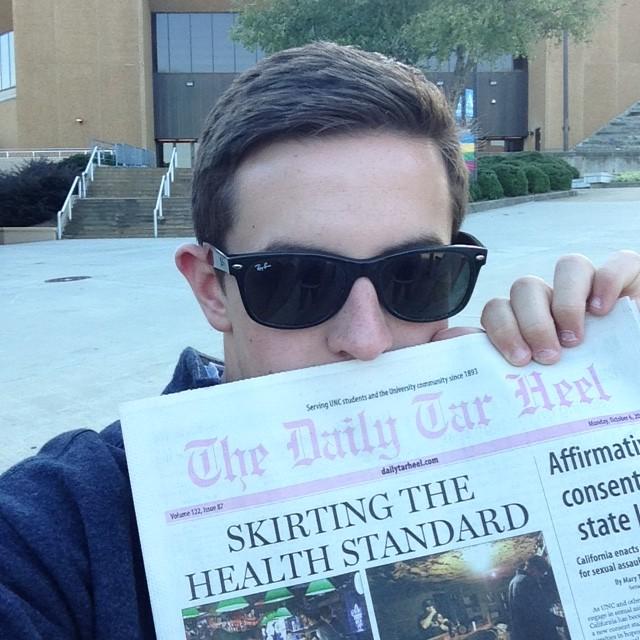 Although it has nothing do with the column itself, here is me with a copy of UNC's student newspaper. Go Heels!

So, you want to do public relations for the NFL.

I’ll have you know that it is a tough job that requires copious amounts of training and expertise. Not every Joe Schmoe with a degree in public relations from ITT Technical Institute can waltz right into NFL headquarters and claim this oh-so-enviable job.

Actually that’s not true. From the looks of the NFL public relations department, you don’t even need the degree.

These last few months the NFL has taken a bit of a hit from a public relations standpoint and that is putting it nicely. In reality, it has been less of a hit and more of a quarterback-blasting sack. The kind of sack that makes Commissioner Goodell squeal with joy in his underground lair of evil football because he gets to finally fine someone. My point: it’s been tough sledding for the NFL’s image as of late.

Most recently, the NFL penalized Husain Abdullah, an Islamic player on the Kansas City Chiefs, for getting down on the ground and praying; in what proved to be a bigger image disaster than anything Toronto Mayor Rob Ford has ever done. While getting down on the ground for a celebration will draw a flag, the NFL needs to have more worldly wisdom and know the difference between an act of prayer and an act of celebration.

The NFL did reconcile this image crisis and published a statement saying that Abdullah shouldn’t have been penalized. However, in true NFL fashion, this backtrack backfired and offended officials who believed they had made the correct call. I believe we call this being stuck between a rock and a hard place.

Adrian Peterson’s child abuse indictment was also mishandled by the NFL. Child abuse is a fairly heavy topic and should be handled accordingly, yet the NFL wanted to get Peterson back on the field as soon as possible. The Vikings had even activated him for their upcoming game against the Saints that week; putting OJ Simpson on the field would have still been a better move than this one.

Granted, the Vikings quickly reversed their decision and relegated Peterson to the equivalent of football purgatory. Yet, this should have never happened to begin with. It reflects poorly on franchises, excluding the Oakland Raiders (it’s darn near impossible to wreck that image any more than it already has been), and the NFL when they retract their decision instead of dealing with it correctly the first time around. When it comes to public relations decision-making, the NFL shroud strive for a little more Peyton Manning and a little less Christian Ponder.

The domestic abuse issue has also been the bane of the NFL’s public image existence. From Ray Rice to Ray McDonald the NFL time and time again has fumbled appearance-wise on this problem. But hey, at least they are consistent, right? Now add in the mounting evidence against the NFL for their underestimation of the issue and suddenly being Anthony Weiner’s publicist looks like a very enticing job. Once again, the NFL was forced to rethink their decisions and promptly deal with each player accordingly. Starting to see a pattern here?

The NFL is in need of an image change and quick. I’m not going to call for anyone to be fired nor will I overgeneralize about the players because the truth is most of the players are, in fact, upstanding citizens. It is just the few rotten ones that spoil the bunch. PR stands for public relations, but equally it also stands for perception is reality. And with the NFL, there is still some learning to do in both.