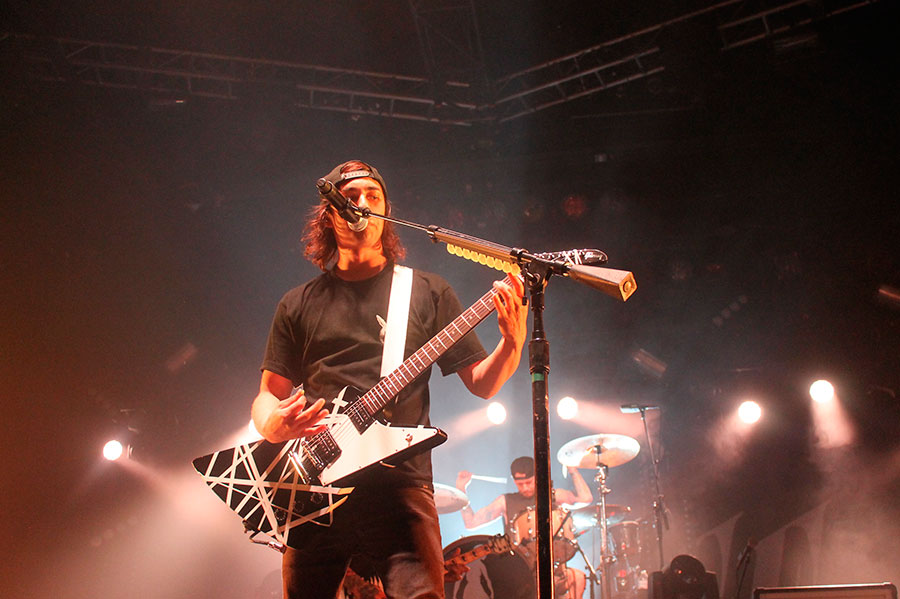 Sleeping With Sirens and Pierce The Veil rock Denver on Jan. 31

Nothing is worse than watching people on stage who are not fully committed to the performance. People prance around without interacting with the crowd and going through the motions of a stereotypical show. If those concerts are your cup of tea, I would not recommend attending the World Tour featuring Pierce The Veil and Sleeping With Sirens.

Being a fan of both headliners, I was beyond excited to watch them perform live. I watched all the music videos and live clips I could prior to the show, making myself more and more excited. Coming from a person who has extremely high standards when it comes to concerts, this was honestly one of the best concerts I have been to. With additions like opening credits, excellent use of fog machines, stellar utility of lights and separation from a cliché rock concert, the show completely exceeded my expectations. Needless to say, it was an undeniably memorable experience.

There are very few times when openers have caught my attention. Normally, I find myself focusing more on my Instagram feed or Snapchat stories than the opening acts. But not this time. Both the openers, Pvris and Mallory Knox, were difficult not to pay attention to. Pvris (pronounced like “Paris”) was the first opener, starting off the night with an energetic vibe. There was a lot of jumping, clapping and waving hands, but with all the action and commotion, it was hard to not be immersed into their set. Everyone noticed their ability to use the stage and fill the room with an incredible amount of energy. Mallory Knox was the second opener, packing their set with intensity. With a lot of interaction with the crowd, almost everyone was mesmerized by both bands rather than their phones.

To begin talking about Sleeping With Sirens and Pierce The Veil, I would like to address one of the best parts of the show, the setlists. Both headliners held their own with an incredible setlist. Normally, I would expect bands to play their most popular songs. Mostly following down the list of their most played songs on Spotify. However, both bands did not disappoint. Sleeping With Sirens opened with their World Tour opening credits, followed by five people bounding out on stage. The crowd stopped screaming and started singing when they began their first song. Without much introduction, though they did not need one, they continued through their set, stopping every so often to comment about how hard it was for them to breathe or make sure the person who passed out was alright. Everything was “Go Go Go” when it came to the show, flowing through the set flawlessly. They set two acoustic songs in the middle of their set, bringing the crowd down for a bit, then pumped the crowd right back up again, ending their set with a bang. Sleeping With Sirens was impeccable. Pierce The Veil could honestly not have picked a better band to co-headline with.

Pierce The Veil began their set with curtain draped in front of the stage and lights shining through, projecting the band member’s shadows. The band played the introduction behind the curtain, initiating the screaming of the crowd. As soon as the first note to the opening song began, the curtain dropped, exposing the band. The hysteria in the room was absolutely evident as Vic Fuentes, the lead singer, took a step back and looked out in the crowd. The madness continued as the show proceeded.

Pierce The Veil also included an acoustic song, imploring the audience to sing along to fill the room, but the spirit was not lacking at all during the set, even with the acoustic break. The band said a lot of, “Bounce with us,” and “I want to see you moving Denver,” trying to keep the action going through the whole night. The band insinuated an undeniably good time for everyone there.

For a show with killer lights, spectacular setlists and the ample capability to captivate every person in the room, the Sleeping With Sirens and Pierce The Veil concert should be atop the “Concerts to Attend” list. Without a doubt, this show should be a top priority for everyone. Not only does this concert hold amazing technical aspects, it grasps two of the most committed and influential bands I know. Both Sleeping With Sirens and Pierce The Veil are touring through the United States and Europe from now until April. They will pack each and every set with an incredible amount of energy.

If you are looking for an almost lifeless concert with no crowd interaction and a complete absence of intensity and dedication, steer clear of the World Tour. They will come at you with everything they’ve got.

If you want a picture to show with your comment, go get a gravatar.