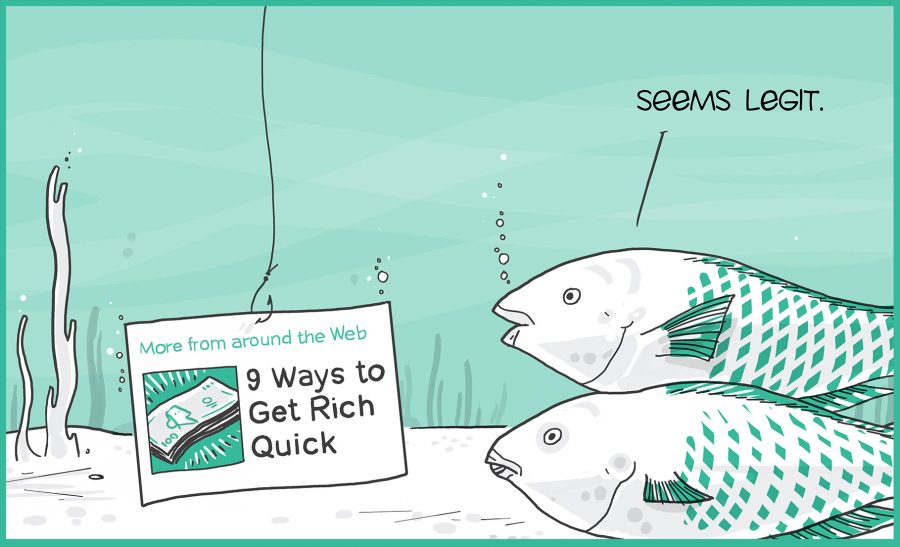 Well, okay, that’s not true. It’s clickbait – one of the most common, effective, and annoying advertising strategies on the Internet, used by a shocking number of large, mainstream websites. Most prudent internet users have probably come to recognize the unlikely, sensationalist headlines they boast: “Drivers in your state MUST know about this new law”, “Here’s what your dentist will NEVER tell you about dental implants”, or “This crazy trick will make EVERYONE in your life like you”.

Since these still exist and are seemingly only becoming more audacious, clearly they are working. People click on them; it’s that simple. I was interested in finding how just how misleading, toxic and malicious these “articles” actually are. After all, if the monstrous news sites such as those I tested rather prominently display these on every single story, they can’t be that bad…right?

There was only one way to find out. Just in case any malware showed up, I was certainly not going to use my own PC for testing. Luckily I had an ancient Dell desktop that can barely run Windows 10 lying around; a perfect candidate considering it can browse the web (though not much more) and it certainly wouldn’t be a tragedy to have it completely destroyed.

I navigated to the homepage of each site, clicked on the first article I saw, and scrolled down to the “From around the web” (a.k.a. “Sponsored clickbait headlines”) section. I then clicked the first five headlines on those panels, for a total sample size of fifty “articles”.

Out of the fifty: 21 contained more links to clickbait articles, 18 had misleading headlines that did not accurately describe the topic of the article, 9 were over two year old pages though they were labeled “new” or “trending”, 2 attempted to infect the computer with malware, 11 exhibited none of these offenses and were actually legitimate, harmless articles, and one never loaded, appearing to be a broken link.

The results are more or less what I expected, save for the two times one of these sites tried to get me to download actual malware.

The first was from an article which Anandtech.com linked to. This was rather disappointing for me, as they are a very trustworthy source for technology news and reviews that have been around for over a decade; I would think them to be above the possibility of delivering malware to their readers.

The headline read “This one weird trick is the number one reason computers run slow”. It turned out to be a download page for a most untrustworthy looking “computer cleanup” program. To verify its illegitimacy and to simulate a worst-case scenario where the reader is unaware of it, I went ahead and downloaded and ran it. The program certainly did not help clean up the system as it claimed, and slowed it down so much that I couldn’t even navigate to the control panel to uninstall it and was forced to completely wipe the hard drive and reinstall Windows. Not fun, plus potentially stressful and costly if someone’s PC with valuable data on it was infected. Additionally, if the PC used was newer and therefore powerful enough not to freeze up as soon as I ran the program, I have no idea what sort of damage it could have done.

The other was, possibly even more surprisingly, linked by CNN.com. The headline read “Shocking photos released by ex-White House employees”. It turned out just to be some regular old candid photos of President Obama and his family. After viewing this page for about fifteen seconds, I was redirected to a page asking me to download a program so that I may take a survey about my Comcast internet service. It was quite obviously not from Comcast. The program it installed ran in the background and took up about 10% of the computer’s resources, but didn’t do anything else noticeable. Therefore I assume that the point of this virus was to remain unnoticed by the typical user, and it most likely connected the computer to a network of others with the virus (called a “botnet”) in hopes to use its resources for malicious means such as DDOS attacks.

It seems that even many of the most gargantuan and widely referenced news sites on the Internet now leverage the power of clickbait. Why do so many turn to this somewhat sketchy, underhanded technique over more legitimate content? Simply put: money. As sites viewed by an enormous variety of users, they know that some will be ignorant of the true nature of clickbait links. The headlines use appealing words, phrasing and structure that inherently appeal to the mind and “manufacture” an emotional response in the reader. Like it or not, it’s an effective tactic that probably isn’t going anywhere.

To summarize: Don’t take the bait.