9 Things That Happened at the Jon Bellion Concert 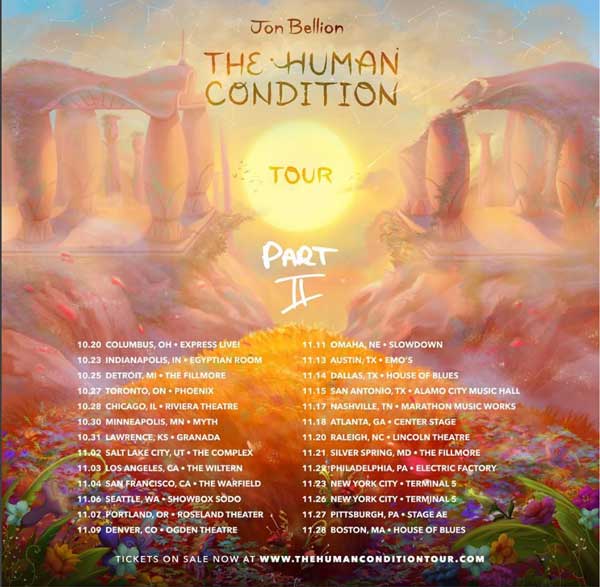 Last night, Nov. 9, Jon Bellion performed at the Ogden Theater, located on Colfax Avenue. The concert is a stop on his “Human Condition Tour (Part II),” which is now sold out in every city on the tour. The night was filled with excitement, and is sure to be a concert attendees will never forget. Here are nine highlights of the evening:

Alec Benjamin opens the night with a four-song set composed of his own songs as well as a cover of “Stan” by Eminem.


Following Benjamin, Travis Mendes performs some of his songs. Despite the technical difficulties at first, he gets the audience pumped and ready for the next act.
A brief intermission follows, filled with remixed songs by Twenty One Pilots as a way of promoting Jon Bellion’s tour with Twenty One Pilots in the spring.
Blaque Keyz starts his set, performing a few of his songs both old and new. Then, he hosts a “contest” within the audience to see who knew his rap solos from some of Jon Bellion’s songs.
The King himself, Jon Bellion, comes out on stage. Greeted by the screams of his fans, he opens his set with “He is the Same,” a song off of his newest album “The Human Condition.”
Bellion remixed some of his songs, such as “Guillotine” and “Luxury.” Though it changed the beat, fans were still able to keep up and sing along.
With a dream to one day write the soundtrack for a Pixar movie, Bellion explains to the audience how important it is to keep dreams alive, no matter what others will say about it. He later gives a speech encouraging people to treat those around them with respect, and not let the hatred in the media and online spread into their lives.
He finishes his set with “Hand of God,” another track off of “The Human Condition.”
After leaving the stage, he returns for the encore song, “Jim Morrison.” The upbeat song left audience members full of adrenaline.
Delete Image
Align Left
Align Center
Align Right
Align Left
Align Center
Delete Heading