What Is It With These Riots? 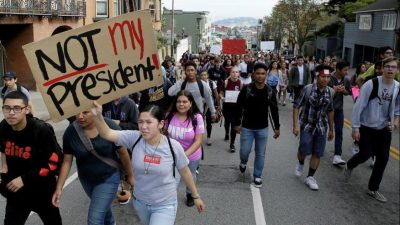 Donald Trump was elected as the 45th President of the United States of America. Whether or not you like or agree with that decision, it happened. It was unexpected, but again, it happened. Response to this should not be rioting before he has even taken office. Trump hasn’t even done anything in the White House; yet Democrats are still going crazy, with riots and protests all over the nation.

Republicans have never done anything of the sort. They have definitely lost elections they wanted and thought they would win, but I have not heard of hundreds of riots breaking out from the losses. Democrats, be adults. I am a minor, but I am still more mature than throwing a tantrum because I don’t get what I want.

Hatred is not the key, acceptance is. The slogan from Hillary Clinton’s campaign “Love Trumps Hate” is being used during these riots, but those Democrats are definitely not using love. President Obama used love when he accepted Trumps win, and tried to heal rifts between them. The hatred I see in the Democrats’ eyes just makes me mourn for America. It just shows how correct Donald Trump was when he said that we needed change. Do what you preach, Democrats.