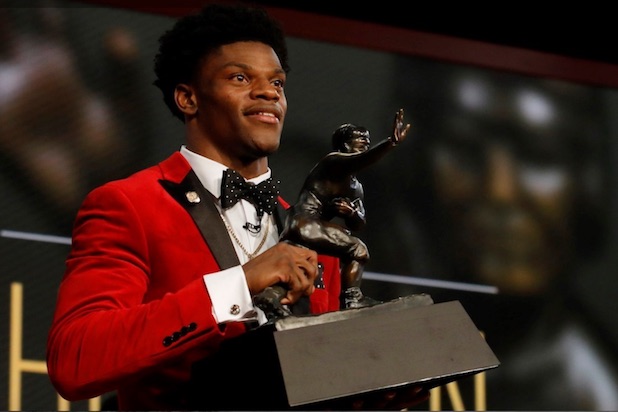 With the college football regular season ending, the Heisman Trophy was awarded to the season’s top performer. This year’s winner was Louisville’s sophomore quarterback, Lamar Jackson. By Jackson winning this prestigious award, he became both Louisville’s first player to win, as well as the youngest player to win in Heisman history. He guided the Cardinals to a 9-3 record, and a place in the Buffalo Wild Wings Citrus Bowl in Orlando, FL, where they will take on the LSU Tigers.

Lamar Jackson was certainly an exciting player, as he made a number of crazy athletic plays throughout the season. He finished with a whopping 4,928 total yards, including 3,390 passing yards and 1,538 rushing yards. He scored 51 total touchdowns; 30 of them in the air, and the other 21 on the ground. Obviously, Jackson was a tremendous all-around offensive player, and he was the only player in FBS history with 3,300 passing yards and 1,500 rushing yards in a single season. With stats and records like that, his season was certainly deserving of the Heisman trophy.

However, despite these impressive stats, Lamar Jackson also made some careless plays and mistakes, including 9 interceptions on the year. Also, some don’t agree with the choice to award him the Heisman Trophy, as his team lost three games, two of them to unranked opponents (Houston and Kentucky). This placed them at 14th in the final college football rankings, despite floating in and out of the top four for the majority of the season.

The controversy that has arose from this year’s Heisman Trophy selection brings up questions like: Does the team’s success matter? Should this award be given out to the most athletic player, or the biggest contributor to his team? What are the factors that truly decide who should win the Heisman?

These questions may never be answered. But, one thing that we do know, is that Lamar Jackson, quarterback of the Louisville Cardinals, won the 2016 season Heisman Award.