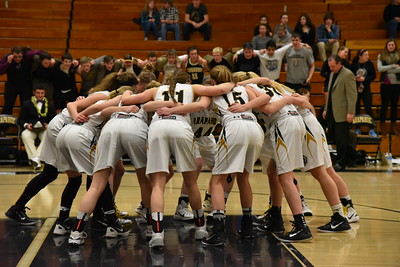 The Arapahoe Girls Basketball team has their first playoff game this Friday, February 24 at home in Sitting Eagle Gymnasium. The Lady Warriors will play Chaparral High School in a rematch from a tight game earlier on in the season. The Lady Warriors escaped an 8 point deficit late in the second half to comeback and win on a buzzer beater scored by Senior forward Elianna Kearby. As they were her only two points of the game they were the most crucial points for the Warriors.

This rematch should be exciting as the Wolverines are coming off a huge victory by beating Mountain Range 78-29 Tuesday night. The Chaparral ladies have won eight of their last ten games and must be determined to avenge their devastating loss to Arapahoe.

The Warriors went 2-2 in their last four games and are looking to turn things around for this playoff game.

Come out and support your Lady Warriors as they take on the Wolverines from Chaparral, and maybe you will see another buzzer beater! Who knows? This should be a high intensity playoff game with a lot on the line so expect both teams to come out firing at Sitting Eagle Gym on Friday.