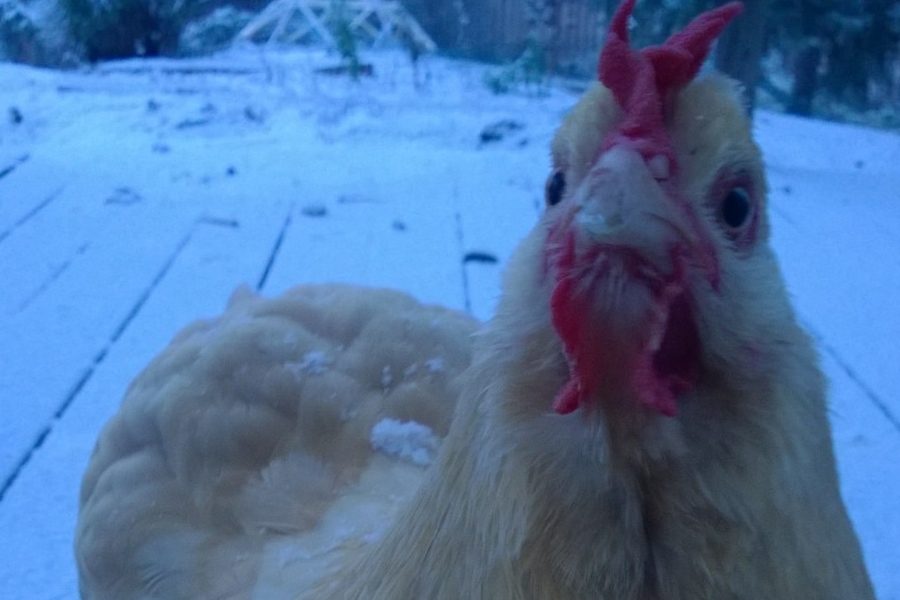 Today, the word ‘chicken’ paints a fairly simple picture: it comes wrapped in plastic in the refrigerated meat section of King Soopers or Whole Foods, cut into neat pieces and laid out for perusal under winking fluorescents. The idea that anyone still processes their own meat, especially in urban areas, seems both antiquated and ridiculous. And that vein of thought is certainly well supported; although chickens outnumber people worldwide almost four to one, suburban flocks, although growing in popularity, are still few and far between. Taking the extra step from raising chickens for eggs or companionship to harvesting birds by hand is rare, and for good reason. Raising meat birds is taxing, and harvest is difficult mentally, physically, and emotionally. Even for people who have no problem with the actual consumption of meat from a backyard flock the harvesting itself is often difficult to stomach.

So, what goes into the raising of chickens for meat? While on an industrial scale the process is very mechanized and regulated, a backyard flock of meat birds is fairly simple to set up. While all chicken breeds can be eaten, some grow much more quickly and are much easier to harvest than others; commercial strains such as the Cornish Cross are able to go from chick to table in eight weeks, whereas heritage breeds like Wyandottes take anywhere from 12 to 16 weeks to harvest. Bantam breeds, like Seramas and Mille Fleurs, won’t ever grow big enough to make worthwhile meat birds, and are much better kept for show or companionship.

The actual rearing of chicks, however, is very similar across all fields. So long as they have access to a heated shelter, food, and fresh water, chickens tend to be able to care for themselves. It must be considered, however, that because commercial strains like the Cornish Cross grow so quickly, they are often prone to heart and liver malfunctions and have a relatively high mortality rate. When raising any sort of bird for meat, it’s important to recognize the high risk involved in such a fickle field of study. Chicks do not need a lot of space, and as meat chicks are very sedentary the area needed to keep them is negligible.

Yet despite the relative ease of raising meat chickens, few people take that significant step toward a farm to table meal plan. While much of that can be owed to the general squeamishness around personally ending animal’s lives, it is very likely that it is also due to the fact that the ability to raise meat by hand is one often overlooked in this era of convenience. While the lack of backyard processing plants isn’t necessarily a bad thing, it also stands to reason that the more informed people are of the role they can have in their food, the larger different local food movements will be able to make, even if just by raising a flock of backyard chickens.