The world is ending. At least that’s what the Twittersphere wants you to believe. Leading up to and after the net neutrality decision, Twitter users couldn’t access their feed without reading the apocalyptic rants about Ajit Pai and the FCC’s ruling to eliminate net neutrality, a measure that regulates internet access similar to a utility rather than a standard good/service. What really is there to worry about though?

The main concern of many is that internet service providers (ISP’s) will now create bundles out of the website you use on a daily basis and charge incredible amounts of money for them similar to a cable package. Banksy, a renegade street artist with a cult following, tweeted out prices of social media services without net neutrality: 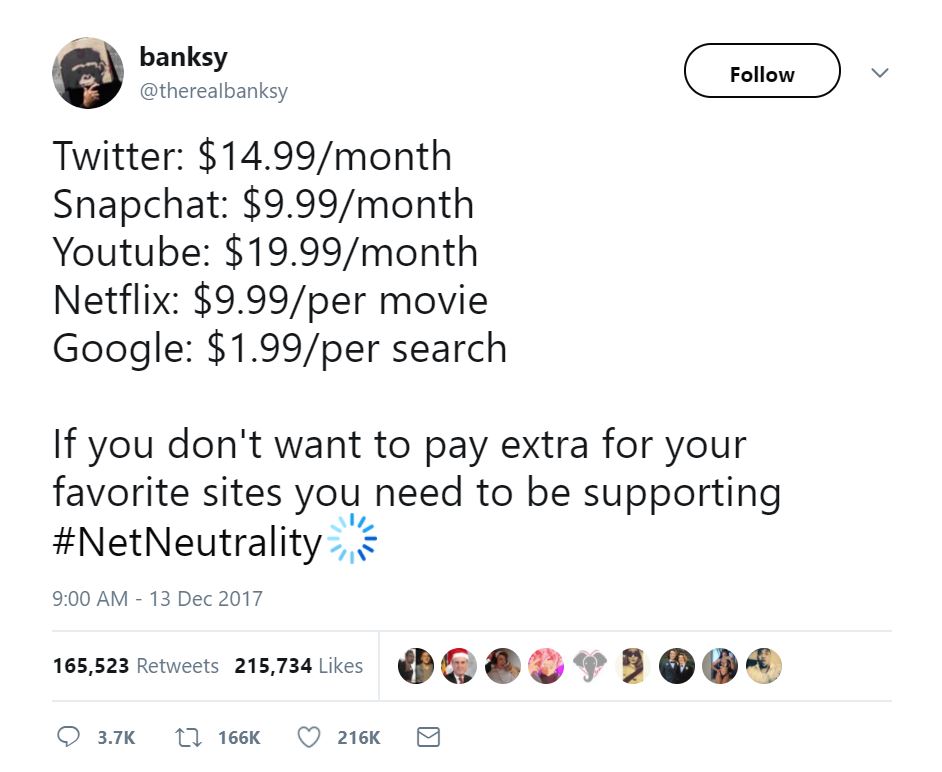 ISP’s exist in a free market economy, where their decisions are met with a response from consumers who purchase their product on a voluntary basis. If a consumer doesn’t like the product he is purchasing, he is free to purchase from another competitor with a lower price or better product. If an ISP chooses to increase the price of every website you access for the sake of extortion, it will be met with their current market share simply choosing not to purchase from them. If every ISP chooses to increase their prices, all it will take is one of them to lower their prices to something more favorable and they will inherit the entire internet access market share. Because of this your likelihood of seeing any change in your data speeds or internet bill is incredibly low.

This entire situation shows the mob mentality of Twitter in controversial situations. People who fall into it scour Twitter for #netneutrality and oppose others with insults rather than trying to incite a discussion. For crying out loud, net neutrality has been around since 2015! It isn’t some age-old law that has been governing the internet since its creation. But the way Twitter users speak about it suggests that it only ceases to exist in undeveloped and oppressed countries like North Korea. If users would choose to discuss and debate rather than take the self-destructive warpath of absolute division, the population of the U.S. would be better informed and have more educated opinions, regardless of which side of the political spectrum one aligns with.