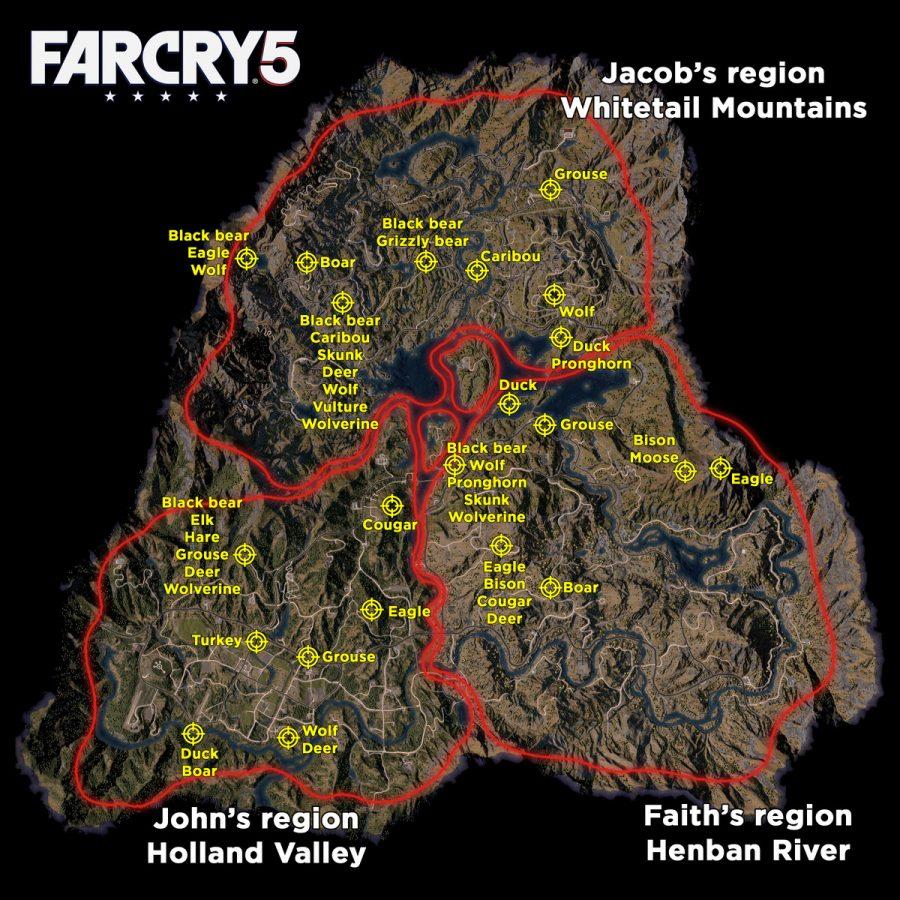 Far Cry 5, an action-adventure first-person shooter game developed by Ubisoft Montreal and Ubisoft Toronto and published by Ubisoft for Microsoft Windows, PlayStation 4 and Xbox One. It is the eleventh entry and the fifth main title in the Far Cry series, and was released on March 27, 2018.

Overview: The game takes place in the fictional Hope County, Montana, and the story follows an unnamed junior deputy sheriff who’s trying to take down the crusading madman Joseph Seed, all the while fighting against 52 crazed animal species and enjoying the nice fresh air of Big Sky Montana. Joseph Seed has commandeered a large chunk of Montana, Hope county, and has cut it off from the rest of the world. And that’s where you come in, Junior Deputy “Rookie/Rook” to crush Joseph Seed’s congregation called “Project Eden’s Gate” or as the locals call them ‘Peggies’.  You can curb stomp the Peggies by freeing local civilians, demolishing cult property, liberating cult out posts, and completing story missions all within the effort to build a resistance. But within the map, there are three regions, each belonging to one of his three siblings. To the north you have the Whitetail Mountains which belong to Jacob Seed. Other wise known as the ‘Soldier’ or the ‘Wolf’. Jacob is the eldest of the four siblings, and is in charge of training the militia. The one thing he really believes in is ‘Sacrificing the week’ or ‘Culling the Herd’. He routinely runs psychological experiments to try to break who he is training and rebuilding them to become stronger. Then you have John Seed to the South West, in Holland Valley. Other affiliations are “John the Baptist”, “The Baptist” and “The inquisitor”. John is the youngest of the Seed family and could be considered as the most sadistic. His job is ‘recruiting’ for the cult. All which including marking, cleansing, confession and atonement. If they survive they become a member of Eden’s gate, with John telling them to accept the “Power of Yes”. Then you have Faith seed to the South East in the Henbane River, and she is also commonly known as “the Siren”. She’s the least to worry about, but she’ll spin a sob story for you and poison your mind with the bliss if she gets the chance. Whoever goes the Henbane River either ends up dead or “walking the path” as she calls it. Once you build up a resistance within each region you kill each sibling, slowly making your way to the top of the food chain. Joseph seed. More commonly known as “The Father”, Joseph Seed is the leader of his fan group Eden’s Gate. Killing him is the last step to ending the cult…. Or is it? (Hint; there’s 3 different endings for this game. All three are actually pretty cool!)

Personal opinion: This is a fan-frickin-tastic game, and I don’t know how to stress that more. Not only can you play it as a single player game but you can also play co-op with another friend as you travel across Hope County. But there is also this breathtaking image from the game. The graphics of the game are phenomenal, even on console and not to mention the work that went into the game, even the little details. The developers created 22 phone numbers, they created 98 fake brands alone for the game, there were 20 motion action actors taking part of the games production, 96 actors who lent their voices to the games characters, and the fishing mechanics were tested and approved by actual fisherman (Obviously the most important part of all of this). It would take 74 days and 44 hours to listen to every line of dialogue of the game. It’s crazy how much work was put into this game, and it really pays off. Not only that but you can have two buddies follow you around to help you. There are more than 6 characters, and even animals, you can recruit as ‘helpers’. There are guns for hire and Fangs for hire. The two people, that I personally always keep around, is Hurk Drubman Jr. a redneck who carries around a grenade launcher like its a sack of potatoes, and could possibly be dubbed as the funniest character in the game with his wide variety of lovable dialogue. And then there’s Cheeseburger, an obese grizzly bear with diabetes, who is the most loveable fluffy thing out there. Both Hurk and Cheeseburger can be obtained in the Whitetail Mountains (Jacob’s region).