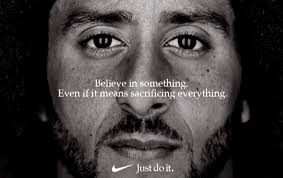 Is the risk Nike is taking worth it?

I am sure by now many people have heard about the controversial decision that Nike has made to endorse Colin Kaepernick as the face of their Just Do It™ campaign. Nikes stock dropped nearly 3% after the ad was released which lost 3 million dollars but was shortly regained. Nike has an additional 31% boost in sales since the ad has been released. However, many people are angry at the company burning their *expensive* nike shoes while some celebrities simply returned and said “I complained that they hurt my feet when I stand for the National Anthem.” Kaepernick’s jersey is the #1 selling jersey on nfl.com/shop, some bought it so they can feel “patriotic” while others brought it to use for kindling.

Ultimately, in my opinion I think that if you want to disrespect the flag that nearly half a million soldiers have died for so you have the right to do that, who do you expect to help you? The police that love the nation that you insist on disrespecting? While this is freedom of speech what will you do when a veteran calls you on it, Put yourself in their shoes, how would you feel seeing the things that you have seen just to have someone disrespect what you put your life on the line for?